ShelterOak
Advocating policy and action leading to solutions for homelessness.
*Holding Oakland & Alameda County Officials accountable for improving services
​*​Tracking how and where allocated City and County homeless funding is being spent
* Disseminating and distributing current information affecting the unsheltered population
EveryOne Home.  the Homelessness Point in Time (PIT) Count in Alameda County was conducted on Wednesday February 23, 2022.  This important county-wide event is a count and a survey of sheltered and unsheltered people experiencing homelessness at a single point in time. Point in Time counts are important because they establish the dimensions of the problem of homelessness and help policymakers and program administrators track progress toward the goal of ending homelessness.
​Preliminary Report released May 16, 2022 below. Click to view Final Report dated October, 2022. 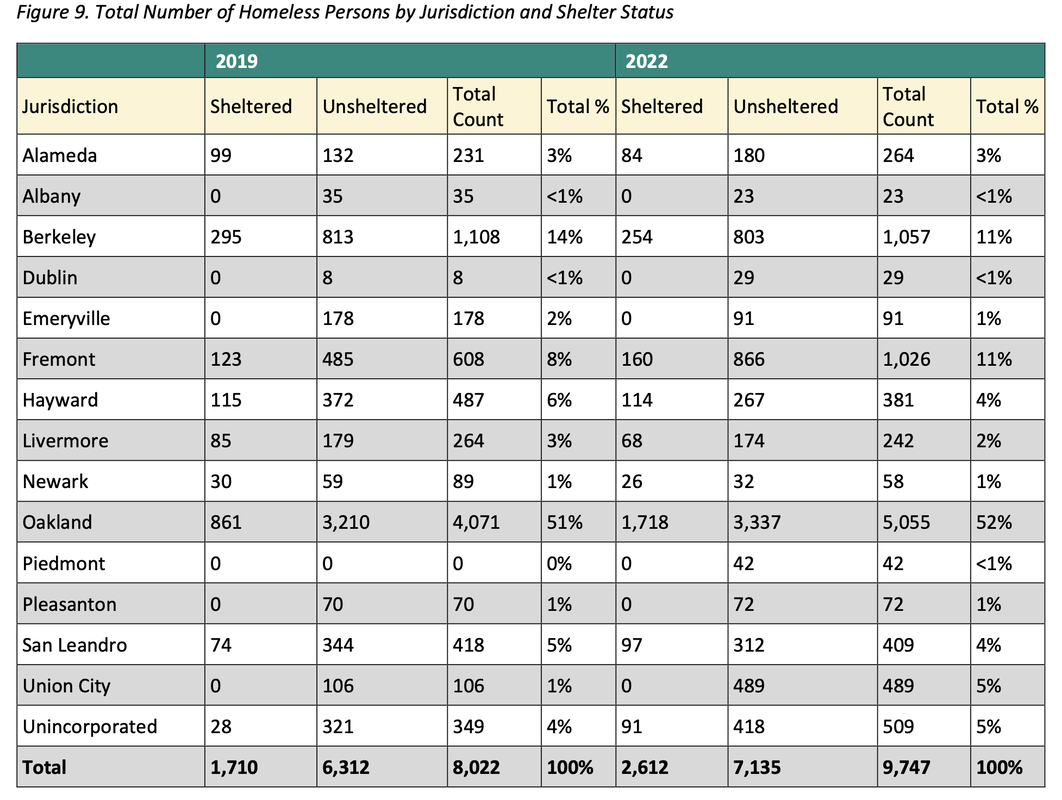 Special thanks to Mercury News / East Bay Times reporter Marisa Kendall for her continuing coverage of the homeless crisis
In The News...

December 26
Here's How to Help Your Homeless Neighbors. Mercury News

October 31
Homeless Programs Still Not Off The Ground. MercuryNews

September 25
Tiny Homes and Homelessness, What the Data Shows. MercuryNews

February 26
Cities to Get State Funds to Clear out Camps. East Bay Times

January 7, 2022
This Northern California mayor wants to give everyone a right to housing. Mercury News

December 13, 2021
Special Board of Supervisors/Alameda County Mayors’ Conference on Homelessness

November 25
More Than A Shelter -- A Support System Too. East Bay Times.

June 12
Something surprising happened in Oakland when a homeless man organized a community discussion.  SF Chronicle

May 11
Homeless Oaklanders Build a 'miracle' Village. The Guardian

May 1
A Little Oasis in the Middle of Nowhere. East Bay Times

April 14
Oakland Auditor's Performance Report on Homelessness Management. City of Oakland
​
April 13
​What Do Oakland City Councilmembers want to do about Housing and Homelessness. Oaklandside.

​February 18
COVID-19 Vaccination for the Homeless Info Session.  Everyone Home

February 11
Oakland got Millions in Covid-19 Emergency Funds. But It's running out. The Oaklandside

August 27
Oakland Wants to Buy More Than 20 Buildings for Homeless and Covid-19 Housing. The Oaklandside

May 27
Power Out For Days at Oakland RV Park For Homeless. KPIX SF

May 12
HOW HAS COVID-19 IMPACTED HOMELESS ADVOCATES AND SERVICE PROVIDERS? thestreetspirit.org

April 15
The Utter Shame of Oakland, Alameda County, & the Unprotected Homeless in the Face of COVID-19  James Vann

January 7, 2020
The Oakland women who took over a vacant lot to house the homeless. The Guardian
​
December 23, 2019
OaklandCity Council Bi-Annual Budget For Homeless, FY 2019-2021
​
December 16
​Supreme Court leaves cities with only one option for Homelessness: Build More Housing. LA Times

October 21
As Homelessness Surges in California, So does a Backlash.  NY Times

October 20
Millions Spent on fixing Bay Area Homeless Crisis-- But where does the money go...   KTVU

September 17,
Proposal presented to the Alameda County Board of Supervisors for use of County Properties for Homeless Needs.

July 2
'There's no way to stop this': Oakland braces for the arrival of tech firm Square.   The Guardian

May 31
Coordinated Entry Flyer from Everyone Home

May 16
It's Not Getting Better -- Homelessness Spikes in South Bay, East Bay.  East Bay Times

April 12
Bay Area has the 3rd Largest Homeless Population in Country; nearly 70% have No Shelter.   KQED.org

April 10
How Much Would it Cost to House the Bay Area homeless? Try 12.7 billion  The Mercury News

January 30
Counting homeless people in Oakland: ‘A reminder of how horrible it is to be living outside’ SF Chronicle

December 13
Homelessness in Bay Area -- It's Worse Than We Thought. Mercury News

November 28
A Potential Turning Point in How Cities Treat the Homeless. Governing The States & Localities

October 19
​Report of the Special Rapporteur on adequate housing as a component of the right to an adequate standard of living, and on the right to non-discrimination in this context, Published Sept 18, 2018, United Nations, (Section 10, #46, Oakland) see Press Release

August 14
Webinar: Home, Together: The Federal Strategic Plan To Prevent and End Homelessness

August 10
The second Public Discussion on a draft of  Alameda County's effort to reduce and end homelessness,
​"2018 Strategic Plan"

​July 30
​30 fire extinguishers provided by Battalion One Fire Protection of San Leandro were distributed by Advocates to encampments as part of a basic fire safety measure.  Recent encampment fires have occurred at Peralta Park, Snow Park, Lake Merritt and Northgate. ​

June 19
$8.6 million will be allocated to The City of Oakland as part of a recently passed state fund to address the homeless crisis in cities throughout California.