ShelterOak, an advocacy organization, supportive of the Homeless Advocacy Working Group of Oakland (HAWG), is extremely disappointed with City and County policymakers. The sense of urgency, political will, and immediately needed actions to protect the universally admitted most vulnerable sector of the population—the homeless of Oakland—is absent.

The unhoused population lacks the precautions available to typical County residents. They cannot shelter-in-place, nor practice social distancing or do often and prolonged hand-washing, nor self-isolate, have little if any access to medical services or viral testing, and no place, if needed, to be quarantined. Due to inherent daily wanderings of homeless persons to access services, jobs, meals, medications, appointments, collecting objects for use, scavenging recyclables, or using public transportation, homeless people come into multiple contacts with other unhoused neighbors and with members of the general public. Without question, any infection of the deadly coronavirus at a tent encampment will quickly spread throughout the homeless population and, as well, to large segments of the general public. Inattention by policymakers of Alameda County and the City of Oakland to the risks of homeless infection is tantamount to ignoring a public health crisis.

This frustration was mirrored Saturday, April 18, by Governor Newsom in a press conference in Campbell, where the governor announced the near-completion of negotiations to lease 15.000 rooms in Motel 6 developments in hot-spot locales around the state. The governor praised several cities and counties, including officials of Santa Clara, San Francisco, and San Jose for initiating positive homelessness actions, including San Jose Mayor Sam Liccardo, whose city has placed over 400 homeless into hotel rooms, which placements are steadily increasing.

ShelterOak appreciates and compliments the dedication and hard work of city and county staff in dealing with the issues and challenges of homelessness. Staff, however, are handicapped by a lack of mutual respect and patchy collaboration between city and county policymakers, hampering expected accomplishments. As of Monday, April 13, HAWG estimates that Alameda County had expended at least 3,000 staff hours for its “hotel-housing operation” and had moved a grand total of 51 + 38, or 89 unhoused persons (personal count) of a total of about 9,000 into vacant hotel rooms. For the few homeless who accepted placement, the rules of residency are unbelievably restrictive, too similar to a prison-like approach. This is neither credible nor acceptable.

Meanwhile, in early March, Oakland received responses that almost 5,000 vacant hotel rooms could be available for homeless placement. More than a month later, and with over $20.7 Million on hand specifically for homelessness, Oakland has contracted for "0" hotel rooms and has moved "0" unhoused persons into the safety of solitary hotel accommodations. There is no reason that Oakland can not independently contract with the city's hotels and motels, and begin moving its threatened population into the safety of solitary rooms.


Neither Oakland nor Alameda County has developed a plan for a hotel-rehousing program.  Neither jurisdiction has thought through nor is prepared to facilitate the various steps: initiation; outreach; protocols of relocating; behavioral facilitation; administering; consulting; counseling; lifestyle assistance; re-relocation; permanent housing procurement; and ultimately, closeout.  Since mid-March, HAWG has submitted request upon request asking for a tri-meeting of city-county-advocate representatives, to which HAWG would bring its street smarts toward constructing an equitable, legible, operational plan that achieves the intended objectives while preserving the dignity of the homeless.

Despite Governor Newsom having procured 75 FEMA house trailers for Oakland since January (still unused); and the provision of grants totaling over $13 million to Oakland and Alameda County (plus a recent addition of $10.5 million to Oakland from the CARES Act; the Alameda County CARES amount is presently unknown) specifically to house virus-vulnerable street people (the funds remain untouched). Additionally, the governor negotiated leases for Alameda County to manage 390 hotel rooms for safe, solitary occupancy by Oakland’s street homeless. Yet, for all of March, Alameda County managed to place fewer than 40 street people (now risen to 178). Governor Newsom also made political appointments of Oakland officials—on faith—to a high-level statewide commission on homelessness (yet to prove its worth). The governor’s frustration with the glacial pace of progress by Alameda County and the City of Oakland in the midst of a raging deadly pandemic was palpable. Pressed by reporters to identify lagging jurisdictions, Governor Newsom responded: “They know who they are.”
​
For almost 3 years, HAWG consistently requested of both the city and county the fulfillment of the Working Group’s highest priority: the public health goal of basic sanitation facilities for each tent encampment of 4 or more households. Although 51% of the county's homeless population lives in Oakland, and although public health is the province of the county, the request for sanitation assistance for the tent encampments was not acknowledged and no such funds were appropriated by County Supervisors. For the same two-and-a-half-year period, the city maintained that it could only afford and service 20 encampments (of approximately 90) with partial sanitation facilities. This stance persisted until an order for public health facilities was received from the federal Centers for Disease Control (CDC), which monitors the spread of the Coronavirus. Finally, Oakland increased city-provided sanitation and hand-washing facilities to 40 (of 90) tent encampments, leaving about 50% of unhoused persons without basic sanitation ... Shameful! Thousands of Oakland’s unsheltered population still feel abandoned and must fulfill their sanitation needs as best they can—a direct hazard to public health.

Oakland and Alameda County are today at a precipice. Regardless of what has or has not been done to date, the deadly coronavirus pandemic still rages and 9000 unhoused people of Oakland are vulnerable, and lacking protection or precautions, are subject to possible unstoppable virus spread. The unhoused population of Oakland must be moved, IMMEDIATELY, from dangerously crowded encampments into the safety of solitary accommodations! The funds, means, know-how, resources, staff, advocates, and supporters are all at hand. No excuse or delay is tenable—only commitment, emotional and political will, and resulting measurable action can sufficiently answer the unstoppable threat.

In summary, the City of Oakland and the County of Alameda must make the changes needed to eliminate the present dysfunctions:
What consequences will we encounter if we continue to leave thousands of people in dangerous health conditions on the streets?ShelterOak strongly supports the recommendations put forward by Homeless Advocacy Working Group, and the Oakland Black Housing Union

Subject:  The Utter Shame of Oakland, Alameda County, & the Unprotected Homeless in the Face of COVID-19

As a concerned and caring citizen and resident, when I reflect on what is being done to protect the homeless population avoidable death and the potent threat to public health of the region, I am shocked, ashamed, and humiliated by the abysmally low level of accomplishment in safeguarding this most vulnerable of the populations from the all-encompassing Coranavirus pandemic.

Today's blog post by Activist Cat Brooks about the City's and County's ineptness could not be more succinctly stated:
"It is overwhelming to see both the City and County’s failure in responding to our most vulnerable populations in these times.  Allowing people to languish in the streets or in jails is absolutely unconscionable. Oakland needs to immediately procure the 6,000 hotel rooms needed to shelter people, even if it means procuring them in neighboring cities.  Money is not the problem. The Federal Government will reimburse [jurisdictions] up to 75% for costs generated in a crisis. The issue is will. Our City and County governments continue to demonstrate that your station in life dictates the services you deserve.  The massive outbreak at the shelter last week in San Francisco should be a warning to us all. We are next if Oakland [and Alameda county] do not act and act fast. Keep the pressure on the City Council, the Mayor and the Board of Supervisors. Call, email, tweet … whatever to let them know that we expect and demand that the safety of ALL Oaklanders be protected at this time ..."

Perhaps SF's scare became too real, but San Francisco's response puts our city and county to miserable shame.  Early this week, it was reported that San Francisco had placed 400 homeless into hotel rooms.  Today, the morning news reported that the SF Board of Supervisors authorized the procurement of an additional 8000 rooms for the immediately sheltering of that city's homeless population.

The contrast of San Francisco with the accomplishments to date of Oakland and Alameda County is utterly shameful.  On Monday, after 3 weeks of effort, it was reported that appx 30 or so homeless persons (of a population of 9,000 to 12, 000) had been placed in the 4000+ hotel rooms that are vacant and available for placement.  The Homeless Advocacy Working Group has transmitted several appeals for urgent action ... yet all were seemingly ignored.

The most modest observation I can muster to describe the vast difference between the 2 sister counties is:  "Something is horribly wrong with how things are being done in Oakland and Alameda County."

Any lawmaker who does not bother to make some noise, demonstrate genuine concern, call people to account, and immediately demand a full reporting, expose, and short-term orders for correction raises serious questions about the role of policymakers and whether they may have failed their constituents.

As a loyal citizen and caring resident, I wait to witness my policymakers immediately STEP UP and DO SOMETHING, NOW ! 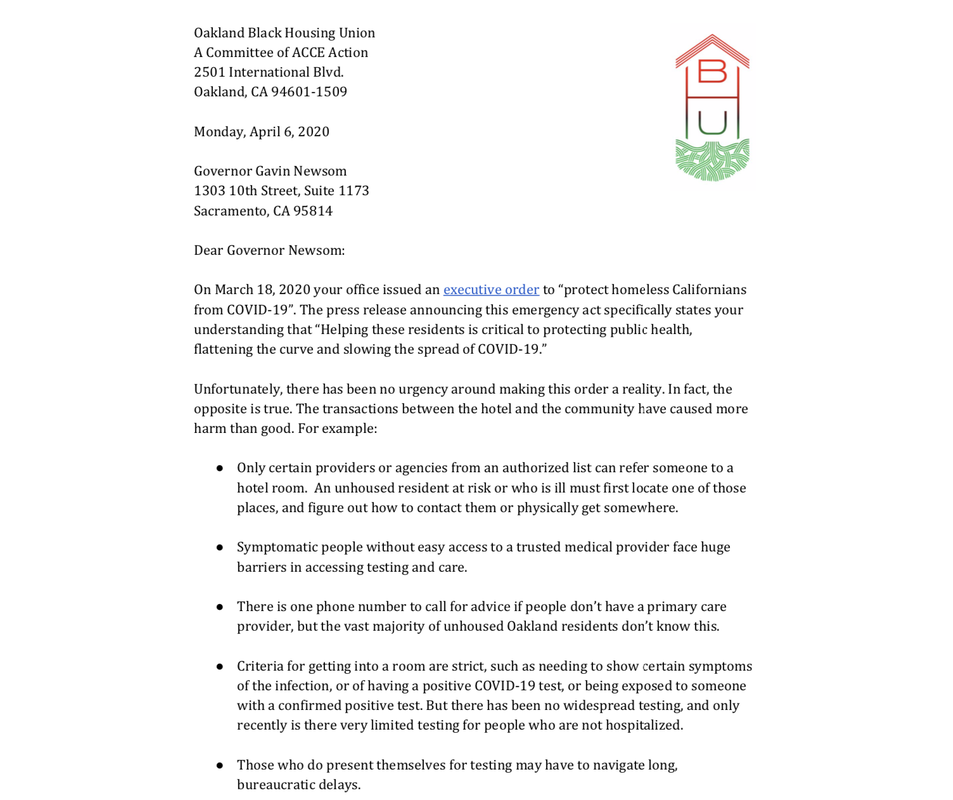 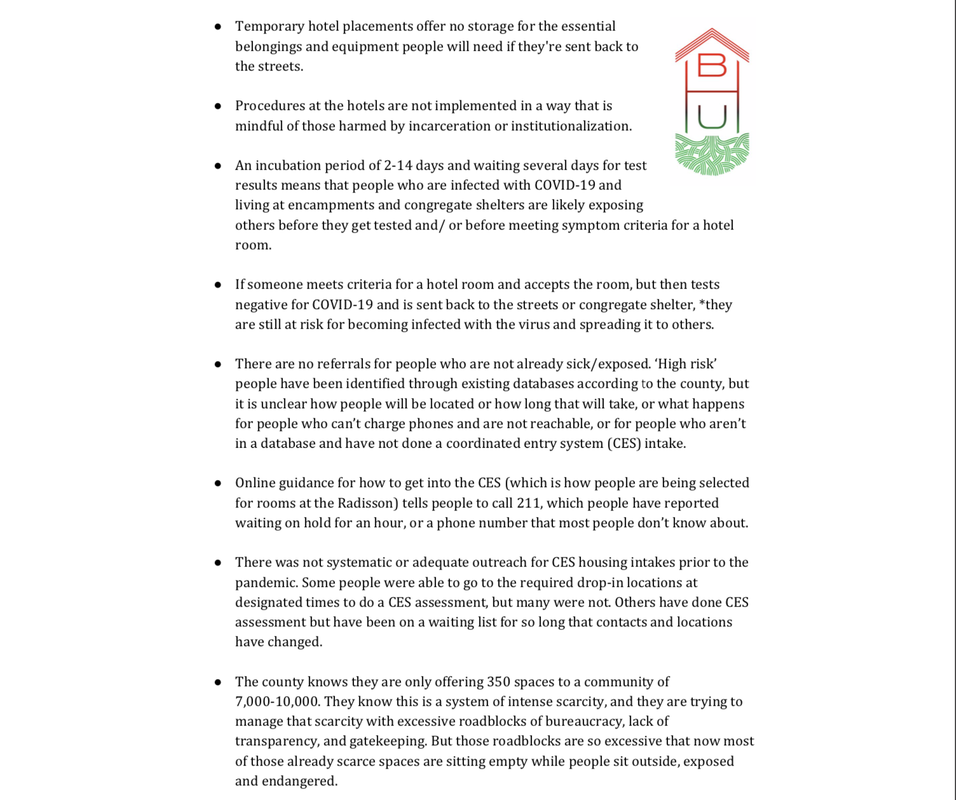 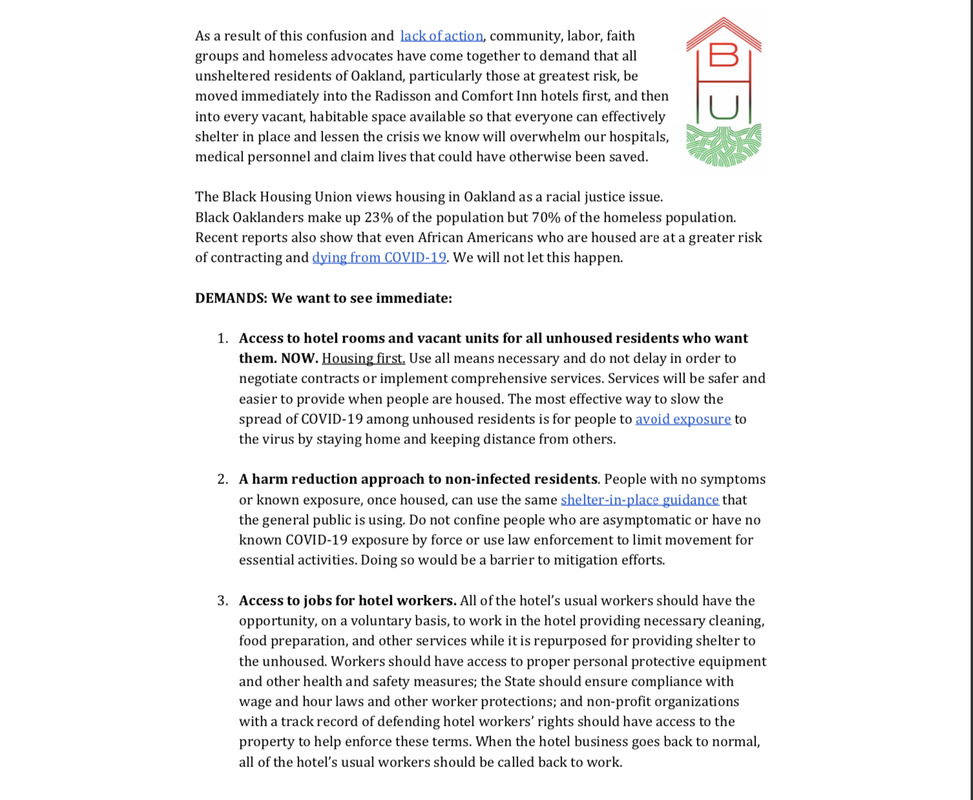 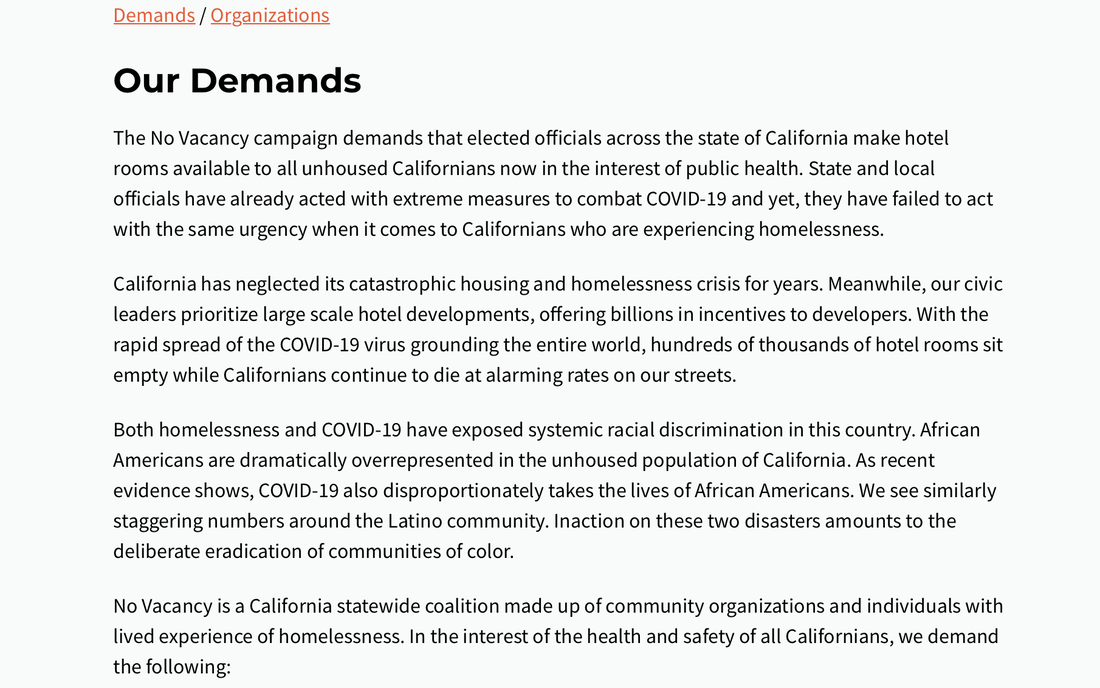 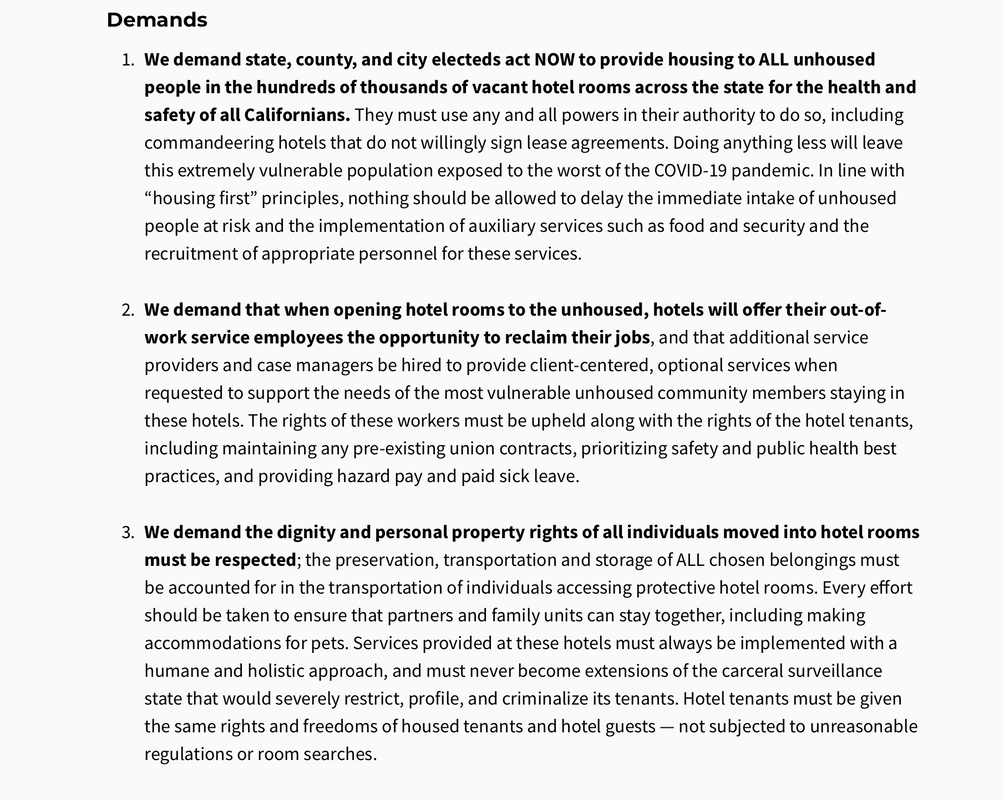