City of Oakland will soon have 4 Tuff Shed Villages (accommodates 40 homeless per village=160 total homeless) that City of Oakland is paying $750,000,00 ea x 4= $3,000,000.00 (Three Million Dollars annually) for operating.  This Tuff Shed program will be serving only 5-10% of the estimated homeless population in Oakland when fully in operation. James Vann reminded us that HAWG did not endorse the Tuff Shed program that the City has embarked on. This current program is not sustainable. City seems to have used the one time 8 million dollar homeless grant from State of California and is paying the operations expenses. The State grant money will soon be all gone, then what happens?

In an effort to get more for our money, I think we should explore other options like Stockton Shelter for the Homeless in Stockton that I was a founding Board member of in 1985. We built dormitories on Caltrans property underneath the crosstown/Hwy5 freeway interchange to accommodate 125 men and 25 women in a separate dormitory with regulation showers and toilets. They now accommodate 400 homeless on the property in added dormitories. City of Stockton pays zero for operations costs. San Joaquin County Mental Health Dept has a parttime social worker who efficiently interviews the homeless and makes the referrals to social services where appropriate.

Passing by the Northgate Tuff Shed site there seemed be a vast improvement over the out-of- control homeless encampments that overwhelmed the intersection at Northgate and 27th a few months ago. The area is cleaned and orderly and the green Tuff Sheds look way better than makeshift tents. It seemed to me the city, along with private donors, had found a useful path to address homelessness.

While the site is useful as a Navigation Center to help expedite available social services and hopefully process the homeless toward permanent housing, this 'safe' site can also be viewed as a controlled incarceration of the homeless, removing them from around the area and clustering them together where they need to sign in and out at a singular entry/exit point of the gated and barbed wire enclosure. Each of the 20 units has two occupants assigned to it who then share a claustrophobic 15 x 8 space. There is NO running water on site for the 40 inhabitants, screeching  BART trains and endless noise of the overhead freeway reverberate off concrete slabs and make the site that much more symbolic of a cold, uncaring community.

After touring inside Northgate I have concluded these Tuff Sheds, now known as Cabins  (Orwellian name for tool sheds) are undignified and a terrible way to treat the disenfranchised who have come to expect nothing but grief from a gentrified society. To all the many well-intentioned people involved in this project, if any of us had to spend a full day/night on site, tool shed villages such as this would never have been created. It is a not too subtle reflection of the disrespect we have for the homeless.

The Homeless Crisis is an Affordable Housing Crisis. There are about 7000 housing units under construction in Oakland, but very very few are directly focused on addressing the affordability issue. James Vann of HAWG writes, "...of the appx 7500 units under construction or in the pipeline, less than 75 qualify as "affordable" -- that is, if a family of four makes $89,600 to $109,000".  Basically, there is next to nothing on the horizon for the vast majority of homeless residents, which HAWG estimates is close to 6000 displaced people.  Tool Shed Sites are designed to assist ONLY 40 people at a time. There are not enough statistics of successful transitioning to permanent housing to prove that these sites are worth their $1 million price tag for a year.

During the 1930's depression the disenfranchised who overwhelmed parts of California were known as Okies in John Steinbeck's, Grapes of Wrath. These were dust bowl refugees  -- today's Oakies are treated as dustbin refugees facing a new kind of wrath as they are pushed out of a booming culture that towers over them and overshadows their desperate plight. While Oakland ascends into an affluence of tech and internet riches that shower local developers with golden opportunities, a disaster for the disadvantaged is also happening side by side mirroring the current economic rise and fall simultaneously.

Oakland has a rosy future, that is, if you happen to have your own garden. As for residents who are getting squeezed out  -- storage shed villages may expand dramatically, becoming thoughtlessly commonplace and a disgraceful reminder of defective human kindness.

Tuff Sheds give the outward un-scrutinized appearance of accomplishment, of something positive being done -- despite their less than "drop in the bucket" impact on the real and escalating crisis.

Regarding the economics of T-S villages, it is actually worse than it appears.  The first Tuff Sheds village exceeded the amount budgeted.  A total of $1.2 million over two years was authorized.  $1M went to management ($200K/yr) and housing placement ($300K/yr) -- which increased in yr 2 + an additionally demanded $25K flex fund.  The remaining $200K went to fencing, security guard, insulation, and better door locks.  The delivered price of the initial 8 X 10ft T-S units was $3,300 each -- which the city had no funds for and got the Alta Bates foundation to pay for as donations.  The Public Works budget was unchanged and none of the additional costs of water, sanitation, and trash removal are included in the homeless budget.

The 8 X 15ft Northgate T-Ss (for which there is nothing in the budget) cost significantly more, and the sheds themselves were donated by Kaiser Foundation.  My friend Pyatok's Architect Office donated site design, construction of ramps and porches, and painting of the sheds.  HAWG advocates state that few residents are pleased with their residency, have complained bitterly about the initial management consultant, and per The Village manager, appx 7 of 10 return to the streets when their tenure terminates after 6 months.

The "Point-in-Time" count of unsheltered persons was 2,791 in Jan 2017 -- a 26% increase in just 2 years since the 2015 count.  HAWG estimates that the actual count is closer to 6000, since people living in vehicles, couch-surfing, or camped in unusual places were not counted.

It is difficult to conclude that the city can be complimented for its job in treating its homelessness epidemic.

Attached (below) is a summary of the discussions at the City of Richmond task force on addressing temp shelter solutions.

​How many ways is the city not meeting the needs of the homeless? please note the underlined words below*.  Lets get started on some proposals.

*Excerpt from  Federal Strategic Plan to Prevent and End Homelessness Fiscal Years 2018-2022:
Provide Immediate Access to low-Barrier Emergency Shelter or Other Temporary Accommodations to All Who Need it
Emergency shelter, other temporary accommodations, and other crisis services are the critical front line of communities’ responses to homelessness, helping people meet basic survival needs for shelter, food,clothing, and personal hygiene, while also helping them resolve crises and swiftly secure permanent housing opportunities. 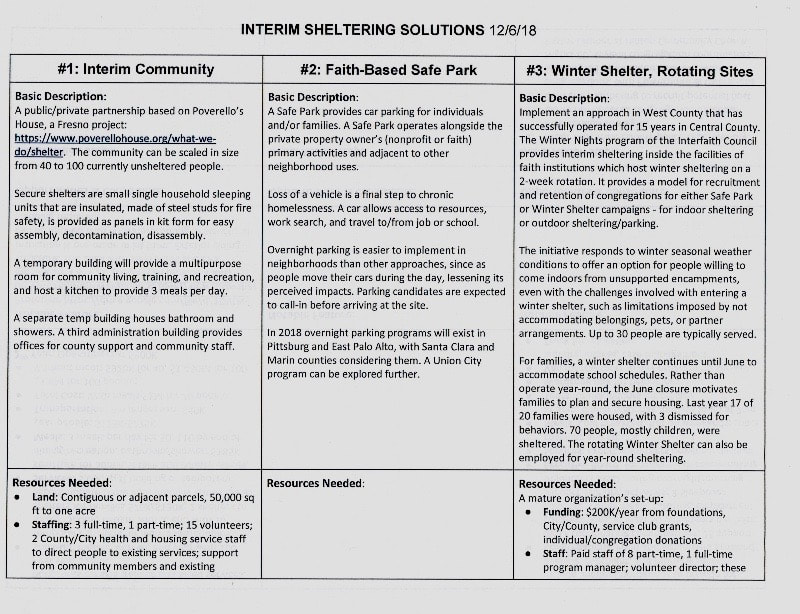 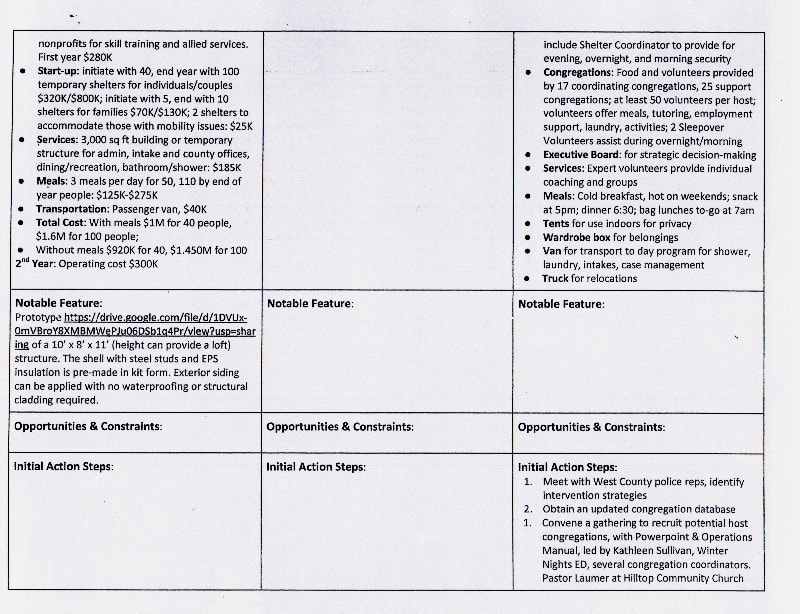 ​
​August 15
​CA Housing and Community Development Grants
$190 Million in 'non-competitive' grants available from the State to house homeless or near homeless with serious mental illness.
Hopefully, Alameda County will be on top of this offer.  (Link to Grant)

I'm not sure how familiar everyone on this list is with EveryOne Home. They're basically a non-profit that aims to help end (chronic) homelessness in Alameda County. They exist to create the collective space for those who want to work together to that end, and they are tapped into HUD (Feds) also. EveryOne Home assists in organizing Alameda County's Point In Time (PIT) Count of curbside community members every two years (the next is this January 2019), as well as Federal applications for funding every year.

Regarding Friday's discussion, it was the second they've held to help update their 2018 Strategic Plan, the draft of which can still be found here. 70-80 folks had already submitted written comments by the time of Friday's discussion, so after that, I'd guess it would be about 100 people who have commented. They've put a lot of effort into deepening collaboration, particularly through making sure both present and past curbside community members have been at the table in the writing process.

I feel this plan is already far better and more comprehensive than the internal report that was presented at the BOS Retreat earlier this month. I have a lot of hope that once this 2018 draft is revised, EveryOne Home will be able to effectively spearhead convening a county-wide work session that will put some meat on the whole thing and move us all forward practically together. I hope this can happen as soon as possible -- I think we need it to help catalyze things like community education and advocacy for the Costa Hawkins repeal (pass Prop 10).

I spoke with Joanne Karchmer today from the Mayor's office about an internal meeting which was held regarding the $8.6M that will come in from the State. This was the very first internal meeting that has been held on the topic, and it sounds like it will be far from the last one held before the money comes in and is officially allocated. Joanne is happy to keep us updated.

Three things to know right off the bat: There are clearly other things, like sanitation, which we've also been pressing hard for this year. But the continued conviction on the City's part is that more money for that really needs to come from the County. So this gives you their present direction between sanitation and outreach. I personally think it's a good one. Regarding outreach, the feeling is it needs to become highly mobile (mobile HMIS for example) and that outreach teams need to be as consistent as possible to to establish good relationship with folks being served. I don't know what the current method is, but we need to run zone, to use a sports analogy. And if standardized outreach training isn't already in place, that's really another big area for growth.

In addition to these things, it sounds like the City is thinking that there need to be opportunities like ONCs and The Village in each district. Safe Parking through the faith community is still very much on the table, and many people feel that there also need to be at least 2 year-round shelters in Oakland. Last but not least, there's the development of the Homeless Green Teams as well.

So again, nothing has been decided about how to spend the $8.6M coming in from the State. Nothing is set in stone. The internal meeting that was held was a very first pass, and for now, folks are back at the drawing board in planning possible steps forward. It's a good time to be writing, calling, and attending events to stir the pot with ideas, especially as they pertain to outreach.

Regarding anything related to health, hygiene, and sanitation, I think we're going to need to keep putting greater pressure on the County...

Peace,
Genevieve Wilson, HAWG
July 31, 2018
​Brief on Quarterly Progress Report of the "Homelessness Council" to the Alameda County Board of Supervisors

A "powerpoint" presentation by the County's "Homelessness Council" (made up of various department heads) was shown to the Board of Supervisors at its all-day retreat, Tuesday, July 31.

As shown in the report, County government appears to prioritize services to unincorporated areas and perhaps some of the smaller cities in the County.  Little of County funds or programs seem directed to Oakland or Berkeley, the County's two largest cities with the vast majority of unsheltered persons.

We asked a few questions, but I did not feel the responses were either adequate or helpful, nor did I feel that County staff had much if any interest in the continually expanding homelessness crisis affecting Oakland.

My impression is that the County is a difficult "nut to crack."  There does not seem to be an easy way to penetrate the County bureaucracy.  County staff seems satisfied that Oakland and Berkeley are big enough and should be able to take care of themselves.